After being in business for just a couple years, you probably have almost a dozen social media profiles. They all take some time to maintain.

That’s at least one explanation of why there are so many awful Twitter profiles.

Even if you don’t live on Twitter like, ahem, some people, your profile does. There it is sitting there every minute of every hour of every day. Year in and year out it’s there standing in for you.

Of course, you’re short on time. Yes, it takes a little time to fix your profile. That time is nothing compared to the damage that a bad profile can do.

In this article, you’ll see some specific actions you can take to improve your profile today. We’re focusing mainly on your professional Twitter profile and not as much about your company’s page. Though this checklist will apply just as much there too! Think about Elon Musk’s Twitter profile versus the Tesla or Space X company profiles.

Having a terrible Twitter profile is like rolling out of bed and showing up on your video conference call with bed head and toothpaste still on the corner of your mouth. If you have higher standards than that, then you should rethink how you present yourself online.

Your Twitter cover photo is the single largest profile element on most screen sizes. That means it’s going to be the first thing most people notice when they first see your profile.

The most basic thing to know about your cover photo is that it needs to be high quality and it should represent you. Stay away from stock images unless you have no other choice. If you have to use stock photos for some reason, then pick something that matches the image you want to project.

A pretty photo of architecture in Amsterdam might be great for your desktop wallpaper. It doesn’t belong on your Twitter profile.

2. Use a head shot for your profile image.

I’ve been guilty of breaking this rule. (I’m breaking it right now…) So this is a case of “do as I say, not as I do.” I swear that I’ll fix this soon.

If you don’t have any head shots then at the very, very least use a well lit picture of you that doesn’t show you doing anything unrelated to your profession. The basic rule is: don’t show yourself doing anything that you aren’t trying to do for money. Does that make sense?

If you write about craft beer for a living (or want to) then enjoy that beer in your photo. For everyone else, no pics of you out with friends at the bar.

Have a look at these Twitter profiles for some inspiration.

What’s Great: The image is high quality and relevant. Chuck Palahniuk is clearly promoting a project. His profile pic is professional and represents the serious, literary guy that he is.
What’s Not So Good: Part of the text on the cover photo disappears behind the profile image. Twitter resizes cover photos based on screen size so you’ll want to consider that.

What’s Great: Regina Anaejionu is great at reinforcing her branding. Check out her website byregina.com to see how her Twitter profile stays consistent.
What’s Not So Good: I’m not a fan of the brick wall background in her profile image.

What’s Great: Melyssa Griffin’s cover photo is bright and very professional. I’m not sure that this is what her real work space looks like or what she would wear at the office but I like it anyway. Her profile photo is clearly professional and shows her as friendly and warm. I also like it that the cover and profile images look like they were taken at the same shoot.
What’s Not So Good: Melyssa has a few online courses that look pretty great. I’d like to see something about that on the cover image.

What’s Great: Everything in Cynthia Johnson’s cover photo is about her. It’s obvious that she does some work with or for Ranklab. You can clearly see Social Media Club, marketingRECAP, and where she’s been featured online. Her profile pic is professional and high quality.
What’s Not So Good: The illustrated desktop, speakers, lamp, and clock seem generic. Those elements don’t have anything to do with her or Ranklab, which is a social media marketing company. Her profile image would also be more effective if she was looking directly forward.

What’s Great: Both Hyrum Lai’s cover photo and profile image are really good. The cover photo is relevant to his work, it’s really high quality, and has great typography. His profile image is well lit, in focus, and Hyrum looks like somebody you’d want to work with.
What’s Not So Good: There isn’t a specific offer mentioned on the cover photo but that isn’t necessarily bad.

What’s Great: There’s a lot of personality in both the cover photo and profile pic. I get the idea that I already know something about Michelle Vogel. That’s good! Her cover photo also includes the name of her website and reinforces for site’s branding.
What’s Not So Good: Just by looking at her cover photo, I have no idea what Mishvo In Motion means. For the record, she’s a travel blogger and that’s in her Twitter bio. I think it should be even more up front though.

Bonus: Save time and money by designing your Twitter cover photo (and a lot more) with Canva. It’s seriously awesome.

3. Show, don’t tell about yourself in your Twitter bio

This means that you don’t want to say that you’re “imaginative”, “creative”, or “enthusiastic”.

Instead, mention something you do or have done that shows off your imagination, creativity, and enthusiasm.

Check out this list of action words for resumes for inspiration.

For more search visibility, use keywords specific to your industry. Just don’t go too crazy. You want to look like the human being that you are not some crazed Twitter bot.

While you’re thinking about how to better describe yourself and your work be cautious to stay away from industry jargon and overused buzzwords. Let “always be a real person” be your guide.

Michelle Vogel shows a good example of keyword use too. 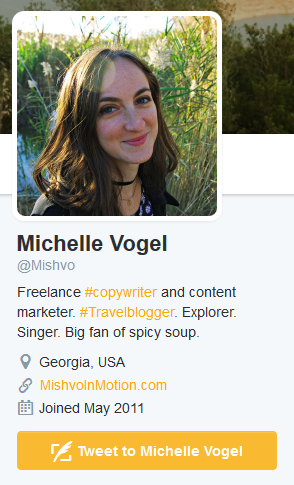 Don’t be shy about adding some personality too. You must do something other than work. Add a few of your interests to your bio to show who you are.

To round out your Twitter profile, be sure to fill in your website address. That’s an easy way to send a little more traffic your way.

Follow these rules for your Twitter profile and you’ll be taken more seriously and get more respect from your followers.

If you need any help, connect with me on Twitter or drop me a line.